Quality OnePlus insurance, from a company you can trust

Accidental Damage cover – Whether you've accidentally dropped your device or spilled liquid over it, our Accidental Damage and Liquid Damage Cover means you won’t have to pay out for high repair costs


Our specialist OnePlus insurance policies cover all models. Whether it's the new, highly impressive Oneplus 7T or older models, such as the OnePlus 5& 6, we know how much your phone means to you. With our insurance plans, you can feel safe in the knowledge that your device is in the best hands if it gets broken, lost or damaged - and with two levels of cover to choose from, Plus and Premium, you can select the policy that best suits you.

Accidental Damage
Accidents happen. But when they happen to your OnePlus phone, our comprehensive cover gives you peace of mind and financial reassurance.
Liquid Damage
Nothing attracts water quite like high-tech gadgets. Protect your OnePlus device against liquid damage and we’ll get it repaired or replaced.
Cracked Screen
Dropped or knocked your device and the screen is cracked or not working properly? Don’t worry, we will get it repaired!
Loss
Prone to losing things? Our loss cover can provide that added level of protection which we include in our policies as standard.
Theft
We offer a replacement OnePlus device and cover for unauthorised calls when your device is taken from you.
Accessory Cover
We can help you protect the accessories that allow you to enjoy your OnePlus - like headphones, chargers and cases - if they get damaged or stolen.
Mechanical Breakdown
We’ll cover your smartphone if an electrical or mechanical fault occurs outside of its warranty period.
Airtime Abuse
Airtime abuse can be a concern if your device gets stolen. Our OnePlus phone insurance covers the cost of unauthorised calls made following the theft of your phone.
Worldwide Cover
We know you love to take your devices with you wherever you go, so if that’s abroad, you’ll be pleased to know our insurance includes unlimited worldwide cover.
10% discount - when you insure more than one device
Get a quote 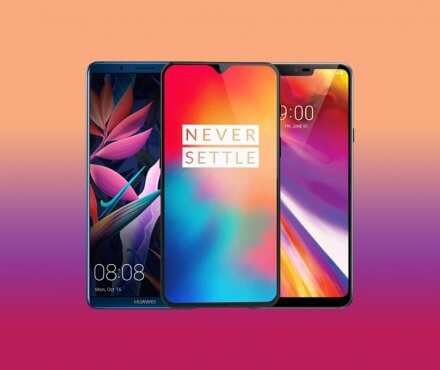 The Best Alternatives to the iPhone

The three newest iPhone prices range from between £749-£1449, which for many people falls way outside the budget of what they are willing to spend on a mobile phone. Today, we’re giving you alternative smartphone options that offer the same or similar specs and give you much more bang for your buck! We've taken the cheapest out of the three iPhones, the XR, and compared the spec and price to other Android phones available on the market.

The three newest iPhone prices range from between £749-£1449, which for many people falls way outside the budget of what they are willing to spend on a mobile phone. Today, we’re giving you alternative smartphone options that offer the same or similar specs and give you much more bang for your buck!

We’ve taken the cheapest out of the three iPhones, the XR, and compared the spec and price to other Android phones available on the market.

First up, is the cheapest of the 4 options, coming in at just £499. This impressive device has 3,000 mAh battery life, which is less than the XR, but its core processor is Snapdragon 845, arguably the most powerful alternative processor to the A12 Bionic. It also boasts Android 9, the latest and greatest update of the Android operating system. The 6t is slightly bigger with a screen size of 6.41-inch and has a fantastic rear and front camera that truly rivals the XR.

The Galaxy S9 was the 2018 flagship offering from Apple’s greatest competitor, Samsung. Operating with Android 8 and a Snapgragon 845 core processor, the Galaxy S9 is not only powerful, but it has a very similar camera setup (12MP rear and 8MP front) to the XR. Its 5.8-inch screen is slightly smaller, but is super high-res. At normal price, there is not a great difference between the two devices, however at the moment, you can get the S9 for £150 cheaper.

The Huawei P20 Pro has the same screen size (6.1-inches) as the XR and is super high-quality. Its Kirin 970 processor is less powerful than Apple’s A12 chip, however the 4,000 mAh battery capacity is fantastic. The area in which the P20 Prop really outshines the XR is the camera – a triple-lens rear and 24MP front camera no less. With an RRP of £799, it is not the cheapest alternative, however right now you can get it for £599. If a brilliant camera and a premium feel is what you are looking for, the P20 Pro could be for you.

Another smartphone that has a 6.1-inch screen, sharp display and sleek design is the LG G7 ThinQ. This smartphone is powered with Snapdragon 845 and has a strong camera setup. While the battery life is not the longest out of the 4 options, it is still a strong contender considering its mid-range price tag.

Below is full spec comparison that includes storage, resolution and more: