19% of young men have a secret phone without their partner knowing. What are our nation’s other phone secrets?

A shocking study by loveit coverit shows how living in the smartphone era has changed the way we use our phones. We surveyed around 2000 people around UK to find out whether people keep intimate pictures on their phones, how careful they are about sharing the photos with others and whether the ability to reach anyone anytime has actually made them be unfaithful to their partner. Our previous research of how smartphones changed relationships was quite shocking, but the results of this study will make even the most free-minded people shake their heads in disbelief.

The study finds that 47% of young Britons have sent a naked picture of themselves to someone and 25 % of those surveyed have admitted having filmed themselves having sex with their partners. These results are not that shocking, let’s admit that if you haven’t sent an intimate picture, you have probably thought about doing that at least once.

More than half of men surveyed admit to sending nudes where only 42% of women and 20% of non-binary respondents tend to send intimate pictures of themselves. Quarter of respondents admit that they still have intimate photos of their former partners on their smartphones.

62% of surveyed have sexted with someone, where a shocking 13% have done it behind their partner’s back.

In general, we can admit that people still do not take the new ‘Upskirting’ law as serious as we all should. Sharing intimate pictures of someone is a serious offence, moreover you don’t know what it might do to the other person’s well-being and mental health. 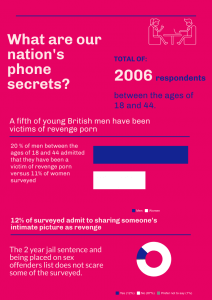 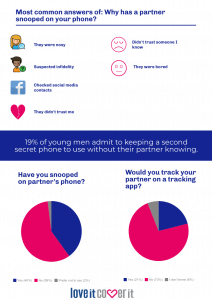